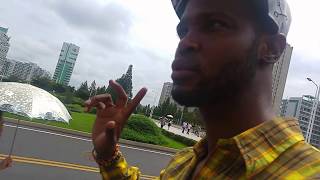 Being black in North Korea 2018. Is it safe for travelers? Must see video

[2.169]
so we are still in Pyongyang this is our last day in Pyongyang we leave tomorrow what we're doing is just being a walking street tour there is not often that we have to be outside to be with the people not in some tourist to take I'm pretty excited we can you know just be among the locals Riku she had those billions out

[28.77]
so now I go to the city and I do a walk in Street or this would qualify as Pyongyang's walking straight talk I think I have little snippets of your videos of everything but not jeongyeon and you never thought I'd be able to even do anything close to a walking straight talk Yong Yong so in essence this is what it feels like to be on the street Yong Yong this is it bro unfiltered through the group we never get to

[101.85]
this is my sixth day here I believe and I still can't believe I'm in a North Korean so here we gonna take a shot on the other side of the street and show you what it looks like

[131.16]
oh yeah boys just being in museums and billions of tourists check this out I think he said an email visas called new Street as you could see everything looks pretty important and pretty new grasses were a medic your hand got a plan their sky Rises on both side [Music]

[224.26]
so I do not anticipate anything different still be more of the same from this point forward

[381.81]
one thing is going to be your child you know hot of junk gonna intimidate this is obviously schedule stocks or my phone this little square bathroom which dropped off it's been pretty still pretty exciting you know come free you guys are right I dare but I just felt like yes just one of many people walking the streets

[521.13]
the crowd still to get my soul they think you're like to wander off away from the group really pretty but I think the first day we went out we were in some point in park and I already liked the feeling because this felt like I was outside walking and this is the velocity takes me back to that time in that moment so very very very happy

[575.39]
so it was a very short walk on buses right over there was job there I'm mystically made a rectangle but still I really appreciate that

[590.61]
all right so maybe we'll end on this note like I said I don't think there's any thing different that we'll see cuz we're basically going back where we started versus in a bad job and in the crowd Osteen I'm more interested in the people as you know then just structures so yeah this is it oh but I'm okay let's capture those there's something about that already [Music]

[732.17]
[Laughter] - this is a really cool sweet spot to end this video piece having fun in the playground in Pyongyang kids will be kids and then their leaders another one girl in is this and Fitness's alright folks this is it hope you enjoyed it wasn't much but we got to walk around Pyongyang and get a sense of what life is like on the street - do people in you know people in they do to the environment and what it is like so hope you enjoy I did really thrilled

A walking street tour downtown Pyongyang North Korea in July 2017. what is like to be on the streets on the DPRK? Is it safe? .. This was a New Street where our local guides took us. A very short walk, guided tours in the DPRK will be spent mostly visiting sites so it was different to be walking the streets even though it was a short walk.
Shiraz Iran. Is It Safe? Walking Street Tour Part 2

The Secret Of The Sanguine - 40k Theories

Power Up Your Elementor Galleries - Gallery Plus!