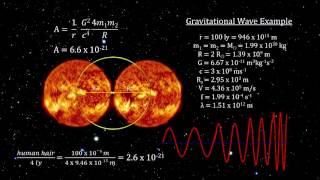 [1289.71]
this plot combines the data from both sites the waveform is consistent with coalescing masses with a 10 cycle 200 millisecond Inspiral that gives us the frequency the rate of change of the frequency and a peak wave amplitude a merger that takes around 2 milliseconds and a ring down as the coalesced objects cease to radiate gravitational energy detector noise introduces errors into all the calculations based on these figures that's why we'll provide a range for each item the amplitude and frequency data points give us the luminosity distance it is important to note the gravitational waves experienced redshifting as they travel across the cosmos just like light does having traveled around a billion light years this wave would have experienced a redshift near 0.1 so the frequency we see here is a bit smaller than the frequency at the start of the waves journey here the frequency data also gives us the chirp mass taking the redshift information gleaned from the merger and ring down portions of the wave form we get the binary system masses these masses are too large for neutron stars that are only a few times the mass of the Sun so we must be witnessing the merger of two large stellar black holes

[1391.58]
during the last 200 milliseconds of their in spiral the orbiting velocity of the black holes increased from 30 percent the speed of light to 60 percent of the speed of light over the same period the distance between the two black holes went from around a thousand kilometers to just under 200 kilometers when their event horizons made contact modeling the final ring down shows that the mass of the resulting curb Lac hole is around 62 solar masses that's three solar masses less than the sum of the masses of the two in spiraling black holes this mass was converted to the radiated gravitational energy in other words during the final 20 milliseconds of the merger the power of the radiated gravitational waves peaked at about three point six times ten to the 49th watts let's take a second to get a feel for how large this number is in our how far away is its segment on nearby stars we found that the Sun converts four point two six metric tons of matter into energy every second the resulting power output is equal to four billion hydrogen bombs exploding every second the Sun is an average star so we can use this as an average stellar power output from our segment on local superclusters we saw that there are 250,000 trillion stars within 1 billion light years is represented around 7 percent of the total number of stars in the universe we get the total power emitted by all the stars in the visible universe by multiplying the average watts per star times the number of stars the power generated by this merger of the two stellar-mass black holes is 26 thousand times greater than the combined power of all the light radiated by all the stars in the that's the signal we saw in September 2015 a billion years after it happened

[1530.88]
the wave information does not tell us in which direction it came from because each interferometer is a whole sky monitor with very little directional information and having two detectors does give us some directional data for example if the wave came in parallel to the line between the two sites the signals would have registered at the exact same time if the wave was perpendicular to the line we would have seen a time delay of 10 milliseconds because the wave travels 3002 kilometers through the earth at the speed of light what we detected was a wave that came in at an angle that caused delay of 6.9 milliseconds the dotted line represents the distance the wave had to travel for a piece of it to reach the hanford interferometer a little trigonometry gives us the angle of course this angle gives us a circle of possible directions

[1610.879]
interferometers are most sensitive to waves that come in perpendicular to their two arms sensitivity drops off as the incidence Direction departs from the perpendicular the curvature of the earth gives the two LIGO interferometer x' an angle difference of around 27 degrees this creates slight amplitude and phase inconsistencies across the two detectors that enable a narrowing of the probabilities to a smaller portion of the sky here are the most probable directions as seen from Earth the best way to increase the accuracy of our directional findings is to use a third gravitational wave detector to triangulate the source several are under construction or being upgraded to do just that here is a map of current and future gravitational wave observatory x' on the Earth's surface one of the greatest opportunities we have now that we can detect gravitational waves will be the ability to observe events that happen before light was traveling across the cosmos the first 380,000 years after the Big Bang are known as the dark ages as you can imagine there is a lot of guess work that goes into figuring out what happened during that period in the universe's history gravitational waves created within the dark ages may help us untangle that mystery more

In this segment of the “How Fast Is It” video book, we cover Gravitational Waves. We examine just what a ‘ripple in space-time’ is. We’ll cover the wave properties including its metric, speed, and the two transverse polarizations: h plus and h cross. We’ll cover how it expands and contracts objects it encounters. We’ll examine binary star systems and the waves they create. This includes the properties of the binary encoded in the created gravitational wave including frequency, frequency changes (the chirp), chirp mass, gravitational luminosity and luminosity distance. We’ll use stars the size and mass of our Sun to calculate the expected amplitude and wavelength magnitudes. We’ll move from normal stars to neutron stars to stellar mass black holes. Along that progression, we’ll see their signature waveforms and build the gravitational wave sensitivity graph. We’ll cover the Hulse-Taylor pulsar (PSR B1913+16) and how it provided indirect evidence for the existence of gravitational waves. We’ll then cover direct detection: first with strain gauges and then with Michelson Interferometers. We’ll cover the LIGO technology and sensitivity and then examine the GW150914 event. We’ll show how it fit the waveform and magnitudes for merging stellar black holes. We’ll also quantify the magnitude of the radiated energy. Then we’ll cover how we located the sky location for the event. We’ll end with a look at other observatories and the impact detecting gravitational waves will have on cosmology.
Classroom Aid - Distance To The Sun