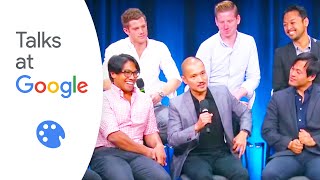 by: Talks at Google

[0.0]
[Music] on behalf of the toxic Google team I would like to welcome you all to see today's talks at Google with the cast of the Broadway revival of Miss Saigon for those of you unfamiliar with Miss Saigon this comes from the creators of lame is Rob the musical Miss Saigon is the epic story of a young vet Vietnamese woman named Kim in a bar run by a notorious character called the engineer Kim meets a young American GI that encounter will change their lives forever featuring stunning spectacle a sensational cast of 45 and a soaring score including Broadway hits like last night of the world I still believe and I'd give my life for you this is a theatrical event you will never forget so to whet your appetite a little bit we've got a little sizzle reel from the show to give you a little preview and then we're gonna have the cast come up and perform a couple of numbers after which we'll do a little Q&A at the end we'll open it up to the audience so if you've got questions be sure to hold on to those to the end and we'll make sure we get to you all right thanks so much and enjoy the performance love story of our time is sweeping audiences off their feet Miss Saigon soars to the rafters it sensational in every way a passionate production brilliantly cast a dynamite Broadway revival the new Miss Saigon on Broadway [Applause] [Music] you [Music] in a place that'll won't let us fear in a life where nothing seems real I have found you [Music] I found you

[135.11]
[Music] I will hold [Music] our lives will change [Music] b-team drum and we'll have music all right Terry [Music] Oh crazies time goes on and on

[204.87]
on the other side of the earth there is a place your life will have worth I will take

[348.36]
how's everybody doing today aren't they pretty so basically at this point in the story my character John and a bunch of the Vietnam vets start a foundation called the boy boy foundation and what that is is that that is a foundation to raise money to go back to Vietnam to help the children that were basically produced by the war American citizens that have a right to live in America so this is a song about me asking you for your money so play along you got to be an audience that's your character we can't forget [Music] like all survivors I once thought when I'm home I won't give it down now I know I'm Claude I'll never leave Vietnam [Music] Wars and a Warren attends some pictures never leave your mind they are the faces of the children the ones we left behind they're caught we toy the dust of life concieved in hell and porn in stride they are the living reminder of all the good we failed to do we can't forget must not forget that they are are too these kids hit balls on every side they don't belong in any place they're secret they can't hide it's printed on their face I never thought one day I'd plead for half-breeds from a man that's torn but then I saw a camp for children whose crime was being born they're called bleed or the dust of life concieved in head [Music] we are their fathers had a family a loving home they never knew because we know deep in our hearts that they are our children too these are souls in need they need us to give someone has to pay for their chance to me [Music]

[623.35]
hello again this next song is actually the finale of act 1 and without giving too much away the scene prior to this was very emotional very passionate and I realize in this moment that nothing is more important than protecting my child my son Tam who at this time is around three years old and the song is called I'd give my life for you

Experience the acclaimed new production of the legendary musical Miss Saigon, from the creators of Les Misérables. This is the epic story of a young Vietnamese woman named Kim. In a bar run by a notorious character called The Engineer, Kim meets an American G.I. That encounter will change their lives forever. Featuring stunning spectacle, a sensational cast of 45, and a soaring score including Broadway hits like “Last Night of the World,” “I Still Believe,” and “I’d Give My Life for You,” this is a theatrical event you will never forget. We were joined by cast members Eva Noblezada, Alistair Brammer, Jon Jon Briones, Nick Christopher, Julian Deguzman, Graham Fleming, Billy Bustamante, Robert Pendilla, Antoine Smith, and Paul Miller. Moderated by Joel Newman.
Andrew W. Lo: "adaptive Markets: Financial Evolution At The Speed Of Thought" | Talks At Google

Nicholas Sparks: "the Lucky One", Talks At Google

Stana Katic: "atp: Where Do You Want To Go Today?" Presentation | Talks At Google

Jeffrey Sachs: "the Price Of Civilization" | Talks At Google