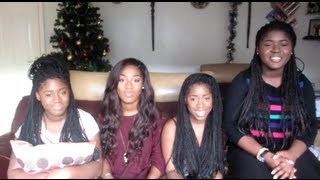 [0.0]
but in at the moment I need to move this down a bit because it's looking up your noses

[8.98]
hello everybody so today we're going to be doing the sibling slash this attack I took some what questions from Boger sibling as a tag let's say our names first this is Jack JAMA Colette you I cannot speak on I think I let you how are you 2220 1815 beta describe each other in one word funny quiet boisterous boisterous however in public she's on the withdrawal she's very well the two person bordering on anti-social yeah right so hey do people ever get you mixed up mmm a peanut and chocolate get mixed up a lot because I couldn't get scold that yes so recently me and trappers got mixed up well not mixed up for telling me look alike dude do you ever argue yeah sometimes sometimes sometimes yeah the blue moon is part of living together because were sisters aunt and was a homeowner and stuff obviously these two are going through their hormonal dangerous this one's 18 this one's like what how do you do I always yeah so yeah we do argue like every other family what's something that annoys you about one another she's a cat sloth like she was breech look at she'll sleep for Colette you can you and can you go and bring the vacuum and then you know slot sorry slow so then please just yeah when I couldn't not be sensitive sometimes but she's 15 so everyone is cut sensor right yeah with chopper she's bringing yeah like you know if someone's like is this kind of a big thing as well I call it like in my head of oil at the Bulldog oil buskers like if someone says something

[147.879]
what's the best thing about one another mmm I couldn't likes to kind of like debate we do very nice so when I came back on and she baked something which was really nice she likes to like she's very creative yes you just cheese I think you're upset like yeah collecti she's but if you've had this off Colette is always the first person to come and say you're right normally the best thing much tougher she very protective you of us lot which is very good so I remember when I had an argument with family at home and get my sister on you know hey favorite inside joke

[289.6]
our favorite favorite slash funnies memory together probably has to do with doing the position oh okay right I'm going to show you the position yes we have to move the couch from where it originally was so okay okay right ready this is the position no I'm gonna pretend to be dad I want to be dad so you left the gas on are you stupid or something what the hell is wrong with you you think you think I'm smarter than me I am sick and tired no you think I'm made of money yes you think I'm made of money yes well you know what I love you - I love you too I love you too anyway assume the position assume it and don't switch that leg and that ladies and gentlemen yes and yes and a finger yes and this is after half an hour show us how you'd about after half an hour no you have to work we'll go the leg and put your fist like this no you have to bring your fist like this ladies that kind of helps to ease the pain my dad allows that that's okay just don't switch your leg okay thank you very much for demonstrating collecti you've been great today but yeah basically something having something me never do something and then Chapel was all like on the floor like I was waiting as well and then daddy was just like no poop I met them obviously done was distracted my truck is waiting for you [Music]

[417.9]
okay so it basically become a cutoff okay so back to favorite or what / funniest memory and then I was one of my Chapel was chasing me downtown and then she just slipped or nothing right round oh yeah another one like for lets you got chased around the table when my dad was on what it's five times two is like like common healthy but then like that was chasing around the same you know about you I hear could not because she was getting on us and then she went to got it and tell that was good I tried to like pull er back you know whenever like I make her cry like I put her back and I shut the door and I miss your window so I got Mexican oh no no no anything you do together hide everything shop Peapod how we like to get a bong beaten to get me a chocolate chocolate chocolate chocolate get it down here and then we have to conduct all that you guys you guys talk about I am most talented what's a talent that we all have so good it's very good at drawing and don't seem very creative person so I'm gonna add two numbers one of those pictures Arison yeah let she's very good doing great she's very good at it's very good sports those are the only time we do anything she's good me as flesh typing you're spending money spending on your Mac stuff I only have 12 pounds I can say because spending on Mac my tenth good black suits and she's very yeah

[543.37]
so that's the sister / sibling tag and and it's taking us like friggin forever but it's kind of hard to rounding up the tribe so so thank you much for watching bye

[742.62]
[Music] we are going J we go into a rainy wedding anniversary today to the power 8 and then basically is in late and we're just going to PI then PI hard and eat hard and through hard not really cuz our parents are gonna be there

Instagram: ijeomauna Hair Info: 16, 18, 20 inches of Bolivian Hair from Marrikas Hair Extensions. I have been wearing this hair for around 9 weeks. Update coming as soon as I can. I lifted the initially very dark colour to a brown colour by using 30 developer and just a sprinkle of bleach. Im glad I used 30 developer instead of 40 because I would normally get those ugly brassy tones - which I dont really like. **Initial Review of the Hair: http://www.youtube.com/watch?v=dDw--SdcdE0

**3 Week Update of the Hair: http://www.youtube.com/watch?v=Ts5cLsoPfZc

CLOSURE INFO Link to how I made it:http://www.youtube.com/watch?v=X_8m7FPOSvU

Link to how I installed it: http://www.youtube.com/watch?v=hXs-i-7xBdk