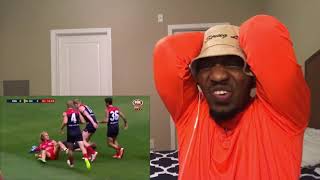 by: No Life Shaq

[0.0]
moose for to learn lose for alert man I y'all been requesting this video for whoa Tom man we finna take a look at them LFL biggest books and hardest hit man of 2015 y'all gonna wanna watch this video and I've been putting it off when today's day man hey it's gotta know air fare stands for Australian Football League that's what it stands for man I never seen this sport played before oh no nothing about it I don't well I know it's divided into four quarters each quarter is 20 minutes long that's what I do know and I know it's gonna post on each end under the net on the nut bite this sport so I'm near all y'all and know anything about this foot to comment down below and give me knowledge of this sport man cuz y'all know I learned a new sports me who's gonna get it to it though man thanks Keith I might be able to get much of the ball yourself but you just gotta make it hard for the opposition that's what I said I've done they're really putting their bodies in and making it [Applause] Oh No what a pair no let's boil it already broke this my flag Oh number 20 30 damage on the head okay all right now what's his name so I want to tell their name down below number 20 oh man we're gonna watch man we're gonna watch a lot of airfare I see it now on the fare I'm a fair enough oh man you gotta play this you know I know it's a maybe their duel is for it run oh my good

[165.209]
just get some that that's the 3c shop I think that's not it you're gonna let that go they're both going for the ball oh my goodness we can't take that in there is famine 20 on the cat has said today another one finished about but they no no no no no no oh no what is this who created this oh oh you know I have no words I have no words bro oh man I got scared for its life and I'm watching the video

[242.95]
still in a lot of pain force coming in oh my god oh oh you guys moving around really really well he's been ignored twice that's not a bad spot collected by

[263.78]
I want to know the best place the best team for everything y'all coming down below right now with it I saw a football in your eyes you got his own TV book

[314.81]
beside me telling you its injuries every game every single game they would never let you slide in America

[337.25]
oh my man I know here they gotta be here because I'm late for this review really popular condemned Oh sniffs fans are fans you do know the man you don't get to way back in Wales that noise we're gonna get wait hold on the jeweler told me the heart difference no I know they're like oh my god uh-huh this is not wrestling game well he just closed when you were like super 8 my Goldberg [Applause]

[398.36]
miss the target Gibson family I didn't know it's at any kind of bow they've gotta be some kind of found so they're gonna kill each other

[417.19]
Mayo this is the same what GW is like that their phones GWS and once the owner was yesterday it's a nun who the bad scene Oh ain't need a lot Brian never let my son play this I never let my son play smart but neither one of my son's playing air fare football you got to be for my strength you got to be Australian you play somebody let me know any kind of sense hey but hey it's entertaining bro it's entertainment anything y'all could tell me my air-filled football let me know if y'all know any more videos on airfare drop them down below right now man I'm a family affair man they enjoy that man make sure you subscribe for more NFL man

Yo I freaking love this contact sport, it put American Football to shame.They

Dave Is Too Much! Dave - Two Birds No Stones| Reaction

All Facials From Haikyuu!!