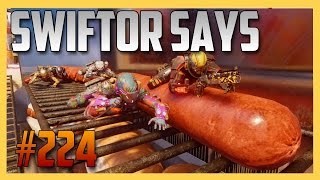 [0.03]
make sure you tap the bells you never miss a video it's right next to the sub button thanks guys what is up unibrow it's time for Swift or says we're on micro and we're we're going to have a family picnic look Dora says Swifter says everyone in the pot yeah it's great bro alright alright lift door says stand up if this is chilly sort of says Crouch if this is coffee it's an option for peanuts yeah the option go jump off the map thank goodness how could how could anyone think this is coffee well I think it's Pinay martini I'm not gonna go into net come on yeah Alan really wanted to be peanuts alright so does not just come down here sign for the for the for our picnic to to move along flash fan ten months man thank you very much dude all right lifter says I don't know like the cream filling carefully carefully lick the cream filling leave me out know what I don't dude what part of this is Swift or says follow mints enough cookies no all right ready oh all right so I propose come over here alright so since we're currently at the at the at the hotdog grill all right yay so the wait a second a take so we need to do what is the can by the way means the finest beans all kingdoms yeah that's the beans from before okay yeah the con yeah and then up I dare you are teeny to make a challenge video where you will you eat you eat there are confi big big big coffee beans all right robots JFK thank you very much all right anyway alright guys so stand still what are you doing bro all right great these are hot dogs last persons become a hot dog dies go rip oh I think you're forgetting thanks happiness no one no one likes it let me find the mat in front of the games you can get away with it good for you all right Swifter says become the hot dog go swifter says fear you're an inadequate hot dog your hot dogs it's not long enough they silver man dates over some good hot dog action right here

[213.56]
even though you're doing what does it mean to become the bun lay down on the bun now Swifter says follow me

[225.51]
all right lifter says last person in the mug guys go get in that mug so that is all you can fit in there you know the guy down is gonna drown right oh yeah we just killed I thought we didn't move either oh my god I'm clustered my peoples it was coffee maybe all right so just follow me we were eliminating the competition there's actually a mugga beans you can't even you Frell guys is it give me over the world yeah all right all right everyone on top of the hot dog go happy bill fall for like every single trick it's amazing even lasted this long all right all right Whistler says the last person touching alcoholic beverage dies go

[385.5]
there are two donuts which Roger gasps there are two holes the two players who camp in those donuts die go oh shit hey remaining players are martini and Vader Swift or says follow me now Crouch

[415.34]
Swift residential abilities and classic Swift door says right all right swift or says jump scooter says face me supercells don't take your eyes off me swifter who says Crouch sad so it says jump so let's go into prone turn around then stand

[464.44]
trumpet requesting resupply Swift or says take one step back and be county UAV good alright use that to kill another player go swifter says stand on top the care package swifter says look straight up

[501.99]
oh I don't thing is is weapon out be probably as swifters has jumped three times then redeemed the Guardian

[549.72]
all right inspection time is over swifters has come back to this bun the bun headquarters Switzer says martini kick these two hot dogs further

[565.31]
Schwimmer says use the gara gal microwave that there we go there we go good deal okay some good cooking all right good cálmate

[587.67]
swift Oh says the first person to touch me wins go I don't know what happens that's like a cowbell generic I also know someone would jump over Swift door says follow me back where it all started in the baked beans solicitor says go into prone alright run for your life in three two one go

[652.889]
guys are in different directions swifter says come back to the watermelon it was on your right on your way back right here swift door says take out your weapon Swift door says without get leaving your current spot first person to kill a bug wins go

[681.73]
congratulations martini yeah everything you behold as yours we're good and they'll get my wristlock Habibi let's go they're not coffee being a PR they'll tell me what I can't eat not coffee industry all right good game guys GD their chin trick and well done well done EEG but there she a penis I've no idea what's up with this view I have 100 really hungry

Lets play some Swiftor Says on MICRO. If you're new to the series, Swiftor Says is just Simon Says in a video game. In this case, one of the finest Black Ops 3 DLC maps every created. Thanks for watching! MY PO Box if you'd like to send me fan mail, I always love reading it: About swiftor: Welcome to the Official Swiftor YouTube Channel! Keep up with my Swiftor Says episodes where I give commentary on gameplay with notable games like Call of Duty Black Ops 3, GTA V, WW2 & more! New episodes daily, let’s play! Swiftor Says You're A Hot Dog (#224) | Swiftor https://www.youtube.com/watch?v=__Wb6lc6gIc

My Cover Is Blown - Friday The 13th The Game | Swiftor

Wearing Solid Colour Outfits To College For A Week / Lovevie