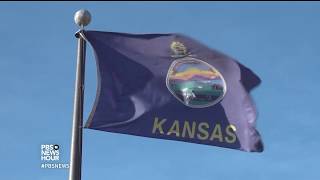 Do tax cuts spur growth? What we can learn from the Kansas budget crisis

Four years ago, businesses in Kansas went from paying over 6 percent taxes to paying nothing at all, as part of a Republican experiment to boost the limp state economy. But when the massive drop in tax revenue destabilized the economy lawmakers started slashing the budget and social programs and underfunding schools. Economics correspondent Paul Solman reports on what happened next.
Trump Refuses To Work With Democrats Amid Simmering Impeachment Debate

Minecraft | Who's Your Daddy Family? Baby Uses Internet! (what Did The Baby Buy?)