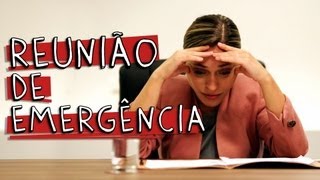 [7.011]
Well, I called you guys here because the situation has reached a level where we'll need to take some action... and I think that we'll have to steal less. What do you mean, President? I mean this, steal less,reduce stealing! I don't know! -for a couple months, maybe. -Wait, this is not right! -Calm down, Senator. -Calm down? Why Calm down? Why? Because of the protests, marches, appeals... What protests and marches? Where did you get this? Didn't you see them on the TV, newspapers and magazines? No, I was in Cancun untill now, I just came back for this meeting. Hey, listen. We can't simply stop stealing! I didn't say we should stop, I didn愒 say that. I said we should decrease it. I've already compromised this money for the World Cup! What will I say to the contractors that depend on this money? -On this deviation of funds? -Exactly. Listen, people... I have an agreement with the bankers. If I don't pay them, I die. -This is for everyone? -Yes, the decision is for everyone. -I扉e just bought a private jet... -We can also actually do stuff. -Hospitals, transportation, school... -God forbid! We can't undo this later! Are you gonna build schools? -You惻l never stop building them. -Perharps what We could share the royalties -of the stolen money equally between everyone. -Sorry Senator, I won't agree with you. A fucked up mayor from a shitty town is not supposed to get rich. Guys, it's just a 20% cut! It's not only about the 20%! It's about what this represents morally! No vandalism. Let's put a limit here. It's just until people forget about this. We'll be back to normal soon in about a month. The Brazilian Football championship and Big Brother will be back... But will we be able to steal retroactively? In the future, You'll be able to do whatever you want, darling. -What will you say to the media? -Don't worry, I'll find a way. -Can I count on you? -Who's telling Lula?

[120.619]
Hey friends, This is Juicy, the Gorilla! I came here to ask you something. Stay at home, don't go to the streets! Home is much better. There are toys, hamburgers... cartoons... On the streets we only find thieves... vandals and bums. Ok, then. For you who have seen this, a heartfelt kiss.

Pop Song Review: "without Me" By Halsey