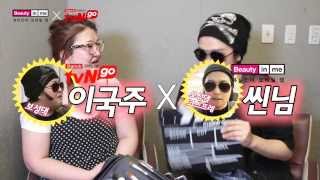 [0.0]
Ready! Action! Lee Gukjoo and SSIN's BeautyXHonor!! I've never seen anyone so much more joyful than me... I've prepared a lot for today. I'm cosplaying as you. I didn't realize it was such an embarrassing outfit The beard's a bit different though. Mine's a slightly regrown, lead-like beard, but this is more like a lion. Wow. You're incredible. Who the hell are you? I'm someone who does makeup. Are you sure? Can I trust you? Of course. Today's makeup is..

[39.72]
Lee Gukjoo and SSIN's Size88 to 55 Makeup. Oh no, but I'm 120! Well it's initially a makeup to look slimmer and having well defined features would make your face seem smaller. So that's what we'll be doing today. We'll begin the makeup now. First, we'll apply some foundation. You're quite pale skinned right? Yes, my face is pale and a bit flushed. It's professionally called a country girl disorder. I'm from Seoul but look country-like. Then firstly, there's a blush removing makeup for getting rid of blushes It's by using this green concealer. I'll partially apply this green concealer. It feels like a man's doing it for me which is nice.

[95.267]
I entrust you to the finish off well. When this is over I'm going to go 'ueiri'(Gukjoo's buzzword meaning 'honor', 'loyalty')!! Much of the redness has disappeared hasn't it? Now I'll use some concealer to cover the blemish. You've got fair skin. I've made a habit of going to sleep after drinking without removing makeup and my pore's expanded. Can you cover that as well?

[130.619]
It's important to carefully press it on like this. You also need to press the rice in when filling your bowl. I've come here right after washing my hair, so lend me your beenie later. I've been all over the place to find the same one as you. It's hard too find cuz, it's out of fashion. Many men wear this thinking it's cool but... Don't ever wear it! It's what women hates most. That's why people laughs when I wear these clothes. Next. I'll put on some foundation. One that's matte and covers well. Could you lift your neck up a little? I don't know myself where my neck is...

[177.08]
I've created a bright blemish-free face. I'll start with the colour makeup now. Before that I'll powder you bit around the eyes to prevent smudging. Cover the parts that easily gets smudged. I'll begin with the colours. What colour do you like for makeup? A men seducing colour. I'll just use my favorite pink eye shadow. That looks brand new. Yup, I got it for you. Firstly, I'll apply some bright base shadow on your overall eyes.

[239.46]
For now I'll line the eyes then shade it in and then attach the fake lashes. I'll move closer for lining the eyes. I even eat(absorb) lines. I draw it and open my eyes and it's gone. Then you need to do it thicker. Open your eyes.

[263.88]
Are you filming when it's half done on purpose? So, I've done a lengthy tipped line. I'll start shading in with brown eye shadow. I'll follow the line making it a bit dark. Fill in about 1/3 of the lower lid. I don't think my voice will fit my image now dressed up like this. Fill in about 1/3 of the lower lid! Don't you wanna try out doing gag. Why do you keep smiling? Am I funny? I'm usually not the one laughing but... You're verry funny. You have thin brows and thickening it up will make your face seem smaller.

[308.72]
So there's something thin from body as well is there? LOL I think I've worn makeup since 2nd grade in high. OMG. Were you a rebel? You should add 'totally' in front. You have to curl your lashes before attaching the fake ones so they can blend in.

[330.84]
I gave up a lot of my girliness after starting the Kim Bosung character.

[345.08]
Looks like you're eating something delicious, huffing like that. Ha~ Argh. lol Just what kinda person are you?! You're not gonna glue that beneath my eyes or something are you? I getting uneasy.

[359.447]
Next, we'll draw the most waited for eye brows. We could try the latest straight brow. I haven't done a straight one before. Will it look okay? Firstly, I'll broaden the area between your brows.

[383.983]
Hey, don't pinch. You can't invite a celeb and start pinching them... Normally people get sleepy when someone touches their hair but... I get sleepier when my face is touched... Gosh, you perv!

[411.1]
Don't take it that far. Haven't you had enough already by calling me a punk before.

[418.44]
It's sad when you call an ugly person ugly! How could you call a real pervert a perv?! Next up, contouring! I'll shade in your face. Contouring is the most important part. Many said I was pretty when I'm acting as Kim Bosung. My face looked smaller. (cuz, of the beard) Let's start with the chin. Make a double chin. Huh...Really... Then we can start contouring this part. hahaha.

[469.5]
I'm already done for, it's useless to pretty anymore. Why not rip me naked today. I won't be able to marry now. So define the tip and gradually lighten it as you go up and it'll look natural. This part here will look more sharp. Double chin addiction, I feel like I have to keep doing this. Comedians are like this.

[514.049]
Define this part and it won't look too much. And on the side brush this part under the cheekbones as well.

[523.38]
Heavily huh...? You know 7 years ago when people highlighted the T-zone...? It gives you a higher nose and I didn't know at home cuz of the lack of light, but when I came out there was this big T on my face. So after that I just totally abandoned that method. It should look natural. First, define this part and brush full length around the eye hole. Then the important thing is to get the details. Take a slightly darker colour and define here and a little of the bridge all the way down . Let's start highlighting. Brighten up the overall face. We should highlight the forehead, nose and around the center of the face to make it smaller. This video will be the most popular I think. lol

[612.92]
To say the truth, mostly celebs or singers have small faces, but normally you have one like me. Don't you all?

[633.24]
Next, is the lips. I'm into something these days. You know not applying it overall. Gradually softening to the outline. It kinda makes the outlines unclear and that will actually be the opposite of defining your features. Like off showing clearly that there's a mouth here.

[687.56]
There's no choice but to restrain myself. What colour will you use? Once again I'll use pink. A bit classy one.

[706.18]
I was gonna eat something afterwards... but I guess I can't. Or maybe I'll just get a straw to drink it all right down my throat. I'll define the bottom line first.

[765.608]
Now look here. We're almost at that finish line. Today's transforming size120 to 88. I'm size77 but seems like 55 cuz of this. Size120 to 88 Makeup is done. The important things I've told you back there. Bring the brows backwards for a smaller face, define the lips and expand it downwards to fill up your face. Hey sis, I've brought you I present. I've got one as well. I'm giving you a Beauty In Me and GLOSSYBOX's colaboration gift. OMG. Thank you.

[823.58]
I heard you're a size66. I'm managing a shoppingmall which specializes in big sizes, so it won't be small. You're a bag of bones in our world.

[850.24]
It's for wearing on top over something sleeveless. It's no good with today's face though.

[887.24]
With that look whatever you do... A bandit aura. You're very aggressive today. It'll look good once you get that off~

Is Neetesh Taking A Break From Music?