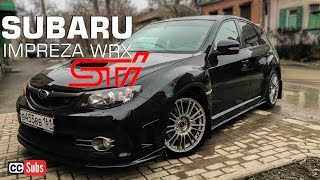 [20.92]
This is a true battle car. Hey, Tigran, what's the horsepower count? [T]: 460-something. 7, I think. 467 HP. It's a challenge to get in. To get out, too. These seats are not just with latteral support. Recaro sports seats, really It's all in leather. But we'll be coming back to the tuning part later. Now about the car. The button here is like in a Niva. I mean, on the left side. Except in a Niva it's not a button To start the car, you need to push the clutch but let's not do it now. Here come the Christmas lights, see? The squealing is for inappropriate oil pressure, right? This is the oil pressure. This one is for the turbine. And this one is for the exhaust gas. And these two indicate oil and water levels. This says STI. So that you don't forget what you are driving, it's shining here. By the way, on the button, the light is red, and once you push the clutch, the light goes to green. Wurrrr

[75.44]
Let's go. Okay, I see what's in the back. Now it's all safe. Perfect. See, Tigran? This one at least has the clutch [T]: And where is it? Bloop! Oh, it stopped. I won't even cut this part. [Beeeep] Holy mother of fck! Check out how safe this car is! [T]: There's taht thing plugged in already. Is it? Oh. Maybe we'd better buckle up, then? People mock me all the time. They say I must buckle up like Davidovich does. Okay, I'll do what he does, then. I'll fasten the belt during review shootings, and unfasten it as soon as it ends. We're not going to drive really fast. It's not like we're in a sports car now, is it? So there's not much use in buckling up in a traffic jam like this one Okay, let's tell about the car. Pioneer is already on. Your fav part. Buttons. There are none. Only this one to control the heater or climate. And the HU. And that is it. The car is pretty rough for driving but the sound is nice. Tigran said he had better sound, though. Well, in his Evolution everything was more pleasant. WAS. But the owner of this car HAS it all now. Let's speed up for a little

[216.32]
Wow, bitchez! I want one of these! You can feel it. And this is not even... I can feel the power. Once the turbine blows, you're just pushed into the seat so hard! It's so cool! Really go... What was it, you said? 460 HP? [T]: Yeah. And the key point is, we have a car DVR which shows our speed. And for those accusing us of breaking the traffic rules, suck it! It's 60 km/h (37 mph) And the forever lasting Subaru vs Mitsubishi argument. Dunno. I wouldn't go there. Both cars are awesome.

[250.8]
The brakes are equally great. I push them slightly, and I the car stops right away. And you haven't turned the ESP off yet. I must admit I'm not even pushing it that hard.

[298.16]
So, briefly about the system. It's fairly simple. High quality, nice history. There's a Pioneer 8700. It has profound time delay settings but a terrible crossover. No need in it, though There's a two-band front and coaxial rear speakers. The front 2 bands are wired via crossover. The channels are clipped at 80 Hz from the HU. From the amp, too And a little bit of equalizer brushing up. Front speakers are Focal K2. Very costly and very high quality speakers. The rear speakers are Audison Voce. Component choice in the system is just great. It has no sub but the speakers alone cope with the load quite well. They play from 80 Hz up The bass is great and the proofing of the doors is amazing so at this level, the system hardly needs a sub Plus, overloading a car of this type is not the best idea. The owner is considering buying a sub later. Right now, there's perfect balance. A fast sport car has been ecquipped with a nice stereo that doesn't add much weight Had we installed a subwoofer, that'd be extra weight to carry around. The amp is one for 5 channels, a small one. 1 channel left extra for a prospective sub Right now it's 2 channels for the front and 2 channels for the back. So this is a pretty simple system. An HU, a 5-channel amp, the front and the back The bass part is the courtesy of Tigran. It was a peculiarity of installation. Tigran protruded the speakers a little bit and crafted plywood tunnels The grills remained the original ones which I'd rather replace, actually. The right one gets in the way of the glove compartment lid. Focal speakers' grills stand out too far. And if they are replaced, it would solve the problem and improve the looks. I just don't like these grills. Besides that, Tigran and his assistant Sergei made great noise- and vibro-proofing. They proofed it enough to avoid overloading the doors, I mean add too much weight. And the noise... Well, I'm not sure you can speak of true proofing with this car 'cuz, you know, the exhaust system is designed so that it covers all the other sounds But for the stereo, this is a very good job done. With a decent bassline like here, nothing rattles or echoes. Plus, it's the plastic there. And it diesn't hit anyplace 'cuz everything's glued and filled. I'd also like to say a special word about the podiums Tigran has made within one day. They are holding really well there. And they perfectly fit in the design.

[461.84]
Check out the tweeter's scheme. It's quite unusual. I'm pretty sure that in France, they'd give you a lot of reasoning behind this scheme And they wouldn't be able to explain why other tweeters of theirs do not feature that I see t like this: the manufacturers of top speakers for SQ make many experimental choices. Well, this one was a success. The scheme is so unusual, and the tweeter plays greatly I'm not a super-tuner. I do some preliminary setting, and after some time the client comes back tor fine-tuning So when the driver listens to the system enough to realise what they're not happy about, they come for a further setup. So I conduct a second setup. After the second setup, this tweeter would probably play even better, but I totally love it already. I won't be telling anything about the HU. We've had a review about it recently. It's a new model by Pioneer, came out late in 2015. The HU completely covers all the tasks emerging in a system like this. Let's listen to some music. [This part of the video can be found on the second channel (connected with copyright violation)]

[611.2]
And a little bit of announcement. This is one Hyundai Getz. It's Hyundai, right? [T]: Dah! It's just I always call these Huinda This is Yura, the owner. He's - what do you call it? A rower? [Yu]: A rower. He's a rower. He does rowing. Is it crew? [Yu]: Yes. And he's in the national rowing crew, correct? [Yu]: Yes. So for the honest money he made rowing, this 17-year-old guy - it's his birthday, btw. And he brought us cake [T]: Seventeen... What? A 17-year-old-guy installed the stereo... Did I have it wrong? [Yu]: No, all correct. Why are you laughing then? [T]: Well, he's the first to do it [at this age]. What are you laughing at, then? You're misleading me. I thought he was not 17 but maybe 37. Maybe he just looks young. Whatever. Don't butt in! Okay, so the covers are by Chubar' Audio. Zhenya style. Zhenya (Evgeniy) Chubar' crafted these. [T]: Zhenya, great job! You nailed it right for the first time ever, again. Tigran reacts to all of the covers Zhenya makes by saying those are the first he ever made okay. Pioneer 80... And the most interesting part is expected here, at the back... Wait, let me tell it. So look. The most interesting part. There will be two stools here. And you'll be able to fish sitting right from the inside of the car? There will be two 18" DeafBonce here. Quarter volt? [T]: Nay. If it were QV, the QV'd go as far as there Tigran has already crafted the raised floor, fixed the wiring. The box is back at the shop. It's before next week you're planning on finishing this project, right? [T]: Yep. Tigran is to finish this up before next week. Give him some cellphone money so that he moves quicker :) [T]: Look here. Is this all ready to go? [T]: This will house the fuses and stuff.

[797.04]
It's for the power cell, right? Narrada? [T]: Yeah, Narrada. Cool. Come on, Tigran. Be a bro, bring the cat here. Nobody's watching our reviews unless the cat is there. Okay, here's the cat. Why on Earth would you be wanting more of cat videos? What's the use of it? No use at all. It does nothing. It only lies. And if you're lucky, it can bite

The Ace Family | Before They Were Famous | Family Biography