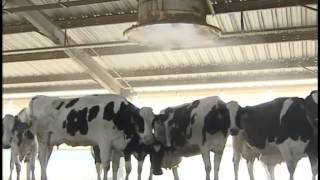 [5.83]
Is it possible to turn a desert into a green range for thousands of cows? It is possible. With money. And Saudi Arabia is very rich with all the oil from its fields and that everyone wants to buy. It could afford to grow grass in the desert and to set up a farm with more than thirty thousand cows. Now, in the desert landscape, it is possible to see not only camels and goats but also Dutch cows producing milk and yogurt. But why did Saudi Arabia decide to start this project and how was it possible to carry it out? Lorenzo Pinna has visited this farm in the desert and this is his reportage.

[57.42]
These are the scenes you would expect to see in a desert. Camels which slowly go from a thorny bush to another. Or goats that replay the same script. Under a deadly sun, more than 45 degrees Celsius. In the background: a landscape of hot sands without a blade of grass. Here a brindled cow would seem completely out of place We can imagine these cows grazing on some green grass in the Netherlands or Italy. Yet in the middle of the Saudi desert, 150 kilometers south-east of Riyadh, is located one of the largest farms in the world. It's called Al Safi and hosts nearly 40,000 cows. This is the story of an undertaking worth the Guinness World of Records. The idea to set up a farm in the desert was born in the 70s, after the oil embargo in 1973. When the oil-producing countries decided to reduce by 10% the production, and the price of hydrocarbons skyrocketed. The Saudis realized that the West could respond to the energy embargo with a countermove. The embargo of food. Cultivating the desert and setting up large farms seemed a strategic initiative, very useful in a complicated game of international politics. Today many of those reasons are no longer important, but the gigantic farm is still there, transformed into a model with its considerable turnover. Paradoxically, thanks to this and other farms, Saudi Arabia has become an exporter of fresh milk and derived products to neighboring countries. But how do Holstein cows, also known as Dutch Frisian, survive in the middle of a desert where temperatures can exceed 50 degrees? We paid a visit to them under the large sheds where they repair during the day and we discovered that an air conditioning system or rather a particular system that atomizes water is able to lower the temperature in the dry desert climate. Under the canopies in fact there are at least 10 degrees less than outside. Obviously the cows to produce milk must eat. At lunch or dinner large trucks fill the troughs with tons of hay.

[203.24]
To supply the entire farm several trips are needed. But where did that grass come from? In the aerial photos of this region we find the answer. The large, darker circles, that dot the desert sands. Here we are, on the ground, in one of the large circles. The long arm of the irrigation system turns slowly around its central axis spraying 24 hours a day the fields below. An irrigation system that, like a great compass, draws large circles. The critical point is obviously the water, but in this area it can be withdrawn from an aquifer that is 450 meters deep. With water and a hot climate, the grass is growing rapidly. Every three weeks is cut, left to dry, compressed into bales and then loaded onto trucks and transported to the farm. Every year this farm produces 150 000 tons of hay and other feed for the cows of the desert. In the farm too, water is one of the critical points. Here, a few dozen kilometers from the large green circles, the situation is more complicated. The water is extracted from an aquifer which is located two kilometers deep and gushes out at 70 ° degrees. We see it as it flows from a pipe during some maintenance. Cooled, treated and made drinkable, the water is collected in two large tanks from where it will come out again to be drunk by almost 40 thousand cows and for many other uses. For the Guinness Book of World Records this is the largest integrated farm in the world. This means that it functions as an autonomous system with its own grass, cows, milk, and packaging system, everything happens in the same company. The 40,000 cows are reproducing themselves without new arrivals since 1980. In fact, the cows are only half, the rest are calves. For males, life will not be very long. But for females the career of producing milk can last a decade. In sheds like this every ten minutes one hundred and twenty cows are milked automatically. Each cow goes through these sheds two or three times a day. A steady stream of animals which by now have learned their way and head on without any fuss to be milked and then go back under the sheds, in a sort of seamless mini-migration. A special electronic label hidden in the blue pendant allows the management to follow the daily yields of cows. Each cow has its own individual file. And when the performance drops beyond a certain threshold, the die is cast. The milk collected will not go very far. A few hundred meters from the sheds a factory rises for the treatment, the pasteurization and the production of various derivatives. A system so integrated and concentrated allows a very high quality and efficiency. Daily chemistry labs control every part of the business: grass, animal health, milk quality. In the factory, almost fully automated (for the record: some machines are from Italy) thousands of packages of milk, yogurt or local delicacies such as Laban, move around. And it all ends in a huge fridge. Probably the only place where you can find temperatures of zero degrees Celsius and where you have to be wrapped up. A record company and a small jewel of technology that has allowed Saudi Arabia to win the bet with the desert and to be a unique exporter of milk. A bet is won but not forever,

Turning Into A Marshmallow With Ronald!