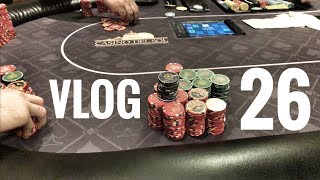 A Poker Roadtrip from Vegas to Tucson | VLOG 26

[0.06]
it's Sunday night we're in Vegas with my homie Jonas Andrew my dad he's here from Indiana so we're we're gonna show them a good time we're gonna play some low stakes poker my dad was like you have to get 21 right so we we just explained some of the rules to them we're gonna go to flamingo and play some poker and two happens [Music] [Applause] [Music]

[67.34]
hey what's up guys I'm in Flagstaff Arizona with my dad and my brother he's somewhere back there but I'm not gonna be able to make it to Talking Stick resort tonight in Phoenix so we're heading on to Sedona after Flagstaff Tucson tomorrow about to get on the road to Sedona but before I do I wanted to wrap up my poker session from last night my dad sat behind me we played crazy and Jonas is up the table to my brother I was all in a bunch I was all-in against Jonas for a $700 pot with ace-queen versus his Ace King which was a mistake on my part he ended up winning that one was on preflop with Queens versus cases for $200 pot and I hit a queen I was all-in preflop with Ace King versus pocket nines for $800 pot and I won that one so just like crazy swinging session I ended up losing $59 not sure if we're going to play poker today if I don't get any poker and today I'll end up playing in Tucson

[138.04]
Oh sup guys I'm a Sedona Arizona and I really like this place there is yoga psychic readings Reiki all kinds of real woowoo stuff on every corner I'm not overly woowoo but I still like this stuff and all goes really big into it by myself even using meditation at the poker table like counting breasts and just being present so I think that it it's definitely something that I like and something that I incorporate into my game what do you guys think let me know in the comments what do you guys do to stay present at the poker table [Music]

[186.09]
[Music] off the Phoenix and pops little bro my little brothers actually on a high-level strategy poker Cole use the sizing then somewhere kind of in between

[248.3]
hey what's up guys we made a stop in Phoenix in Arizona and the reason why I wanted to stop here is because a good friend of mine that I went to high school with here in Arizona he delivered one of the most amazing speeches at my wedding and he said that I was a huge source of inspiration to him and if it wasn't for me being friends with him then you would have never taken the leap into entrepreneurship now he owns this location his mother green in Scottsdale on Pima Road he doesn't know that I'm in town I'm gonna surprise him I'm just so proud of Matt for pursuing a dream of his to be an entrepreneur and it moves me to tears to think that like I had an impact to help him do this like I said this is one of the big things about my channel is that people been reaching out saying that I've inspired them that's what makes this whole thing worthwhile for me and there's what I was able to do that for one of my best friends in high school all right guys we're just leaving grab a green and here's the scoop come to the one on Pima and Matt the owner if he's here tell him that you want the Matt PB&J smoothie it's not even on the menu but I arranged for Johnny vibes followers to be able to order this and he's creating a button on the iPad for you guys to order Matt's PB&J smoothie it's a secret menu [Music] [Applause] [Music] sup guys were at del Sol and I'm a jazz casino of the Sun my forget max bet here 635 635 dollars which is very interesting so it makes the ad the spread limit definitely makes things a little bit tougher but it didn't really come up to Austin Oh what I raised it was like appropriate it was King sizing yeah I basically made sets all day yeah it was fun time so I'm gonna be back so thank you absolutely

I take a road trip with my dad and brother from Las Vegas to Tucson, Arizona. I ended up in San Francisco, California about a week later. I was able to put in a few poker sessions along the way at Flamingo in Las Vegas, Casino Del Sol in Tucson, and Lucky Chances in Colma. Music: Halsey - New Americana (ye. Remix) (hlsy flip) My strategy group: https://www.facebook.com/groups/JVibesPokerSquad/

My startup - Socially Conscious Clothing made in LA: https://deepvibes.com

Playing Against Maniacs On Live At The Bike! | Poker Vlog 14

Playing Poker At The Wynn Macau With Vip's | Vlog 22

😱 Buying The Most Dangerous Msp Item!! 😱 *not Clickbait*