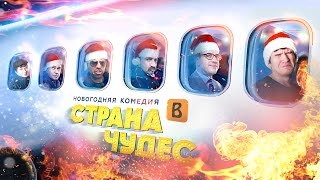 [0.0]
ATTENTION. This video is a work of comedy and not intended to be taken seriously or offend. YOU MUST BE 21 OR OVER TO WATCH THIS VIDEO! Finally in our country came а good Christmas movie, that was not made as soulless as "Yolki" but using the same pattern of an almanac. As kind as a movie "It’s happening to me” - but not so sad. With the Quartet I starring, but not a chamber film as "What else men talk about”. Is it Christmas gift from our cinemamen? Let’s find it out. /nice music, voice and guitar/ First of all it is worth saying that this has been promoting in the all possible ways- streets advertising, Internet advertising, TV advertising >> TV news: New Russian Christmas comedy >> TV news: will be shown at the cinema from January. >> TV news: A comedy history that was made >> TV news: by the masters of the genre. This promoting is not surprising. this comedy was made by the directors - Żora Kryzhovnikov and Dmitriy Dyachenko with purely Russian black humor. And what's the most important- quality humor! Can we expect something else from two of the most successful comedy makers of our country? In addition project won the first place in the scripts contest -it is not surprising that team Quartet I is advertising this film and you know I am not even afraid of using the music by Tariverdiev. >> Film text: Let's become acquainted. Deserving films deserve the great composer. In "Wonderland" the characters are not associated - neither personally, nor with a time. Somebody's story is day long, somebody's story is week long. But I won’t sred they as the creators did – it’s better to talk about each story separately. Otherwise this vinaigrette is not completely understandable >> Slav the Split: And I will tell the first story. >> Slav the Split: It begins with an introduction with

[1557.28]
Naturally, as a consequence, the check multiplies. The families see a huge amount and of course, unite. >> Film text: You, kids, should care about us

[1583.1]
Stop! Stop! Stop! Why no one thinks about our planet? We also need to take care about it and find the authors of this novel and sterilize them. As well as the people that are ready to advertise such a humorous movie! >> TV news: You must watch >> TV news: this movie on the New year holidays-"Wonderland". -Isn’t it funny! Hehehehe! What's wrong with the film "Wonderland"? Generally - everything. Imagine this crap, but made not as the separate stories but as a copped salad that came out from the stomach of the owner, partly and mixed up. Here you are shown the police, that is with Sasha, further we are shown the crying for money villagers, then the two families shouting and then a boozing with aliens, then bribery and the noses of the Quartet I. And then everything once again. And again and again and in this confusion and only one thought comes - either Kokshenov snatched the budgets or the murlocs got the surface of the Earth and decided to study cinema. The stories are not connected – furthermore, they are pointless. And the characters in them are stupid, nasty bimbos, who influence nothing. They are trash flying in the wind of the situation. Oh, and one question - What did the creators want to tell? What did the creators of the last story want to tell? Family is important. Thank you. Shoot! Many thanks for you! Without this animalization of the heroes and your example with the cheese plate I will never get it. And what about the cop Sasha? Steal, bribe, do not help, spend time with a corpse, all for the sake of his wife. You are good, of course, but for the sake of his wife you shouldn’t use lawlessness, right? In addition the character does not change. The story just ended and that’s all. What did you want to say? That all the cops are bastards? Thanks, I got it at the novel of the Quartet I. And what is the meaning of the story about the Field of Miracles? Money is everything? You will be curse, miscalled, hated, but you lose money and you will be begrudged. It is certainly cool, but that doggery attitude and that doggery words of the wife won’t be forgot neither by me nor by the character. Or what? I have to hem and say: "Brush ape!” And the Quartet I is just a dull shaggy dog story that leads to the conclusion-for the sake of boozing you can take the money and it doesn't matter that it's a bribe! The characters are piss poor, there is no history, no humor in general. But we will our fans for sure! Follow the precepts of the story itself. By the way, it is very funny that all novels except for the only one are about money. It is New year in the country! Only money. Well, of course, a cheese plate, Yes. A fucking cheese plate. This is. .. fucked up. Well, the story about aliens- the last thing you want to criticize. The characters are good, Yes, again, vodka and the jokes were limping and the motivation has disappeared in the end. But in this cake of shit the final story seems to be a cherry. And you want to ask-how are these stories are connected with New year? The authors just wanted to get some greens but they didn’t want to bother. You can place any novel in any other times of the year and nothing will change. You know, it you put some snow at the cake of shit the cake won’t be better. Truly, one of the most dull, poor, miserable and unnecessary movies about the new year. All the bad! -Heh, motherfucker! Happy new year! Aaaaaa! Wait. Fucking fuck! AAA. Here, right now! /pleasant Christmas melody/ /pleasant Christmas melody/