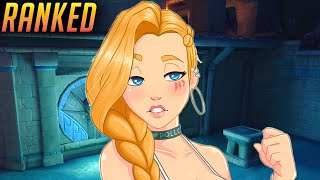 [0.03]
the hunt calls the gods are watching our blood is rushing and the hunt is on like a hunting party haven't like in that

[12.809]
[Music] there's no throwing stream this is a fun stream no it's fun not playing the same damn character every day [Music] well you see how she's actually better because she has first this is the first minute I'd rather lose with style and win and be boring

[46.559]
alright you didn't have to do that calm down you thanks so much ash for the tier 3 we're already subbed oh geez thank you so much

[76.85]
I might a grenade thing there Danielle see every day

[109.49]
all right whoo whee barking - I just don't want her to be able to stand there for free because we're gonna have an Eevee around this somewhere it is you're really getting pressured out here

[141.569]
no he's one I fucking burn fun no I marked the wrong guy marked the dump instead of my Cola there

[159.51]
yeah I don't know if we want to push up further this and or we just want to hold this because this is a pretty damn good spot to hold see if he's gonna start messing with me in a second

[193.5]
we just chill it's like right over there they already hit the I don't want to leave myself to you honorable to a deep link let's just deal with him keep an eye on it I think they're not really doing too much down there

[253.39]
oh where the hell did you come from miss shit mr. Schock the diesel all right goodbye hydro goes or it's fine take it all from it

[355.8]
[Music] they both for range logo that's maybe a no-show point spawning in 15 seconds this is right five four three two one [Music]

[384.89]
I guess double just a tyrant Oh No he likes okay it's fucking V's on our high ground too

[440.5]
why is he can't he's trying to cap it because Barracks a point tank but we're getting so much pressure on us that we can't move in so are Drogo's is like struggling against this you hear right now this is the main problem

[474.4]
there's only so much you can do to the tank because to get the point she's the only one who can for us

[504.26]
I just have to just have to be really careful because this TV is gonna try to blink over here all the time keep an eye on that and watch the tow hooks as well same thing this she's already thinking about going up against

[619.65]
hey thanks for the 510 bits appreciate that very much thanks guys for the loop as well ZV plays oof well you slick is he's not even playing pound that's like a week it's learning the game just I've seen this situation like a hundred times in different ways let's just kind of know how to play it like a B if they could capitalize on a little bit better or win a trade it could escalate very quickly three make it just to remove me from there but ging was playing up there with me a bit is fucking the KOA I kind of don't have a choice but to play high as tiger as I feel yeah he's gonna push into me stop jumping off the fuckin tiger

[684.18]
Roger carefully you got to watch for Evie somewhere just want to keep remarks they she's scared to do something

[701.07]
fuck in the car here to watch that fuck because might actually fuck she cleanses my reveal I realize that we should be able to burst whatever gets the point early

[739.38]
over time I couldn't just play doubtful brother of L think it's work there is just now

[760.45]
- I'll just get last Langford you and a nimble really that's questionable hi Fernando I'll turn a hump point when I played Fernando on this map earlier today

[829.48]
a Schlow I've had worse once more into the fray Terry Crews I remember using all those commercials

[864.529]
thank you how they backdoored it nice there were like two people on in action