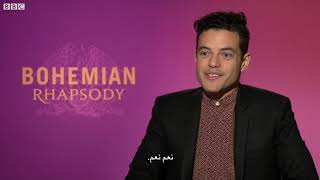 [1.07]
Egyptian-American Rami Malek inhabits the role of of British pop music legend, Freddie Mercury in Bohemian Rhapsody The film tells the story of Mercury's rise since 1971 when he met guitarist Brian May and Drummer Roger Taylor and became the lead singer of their band, which he named: Queen which later become one of the most famous bands in History attracting huge audiences at their tour shows and sold over 300 million albums and reached its pinnacle at the Live Aid show at Wembley Stadium in 1985. It was watched live by approximately 2 billion people, and that was thanks to Mercury's performance which was hailed by critics as the greatest performance of Rock music ever

[55.7]
that he's not merely a singer but he's also a performer which makes it what a complex job to inhabit him how did you achieve that I would look at him and one years to me one of the greatest performers if not the greatest stage performer of all time and I thought how am I ever going to you know reach the height of that it seems like an insurmountable task but I thought about it in the way that I look at any other character that I would create and just find the humanity in him so I I started to look at him as a young man and obviously his name is not Freddie Mercury its Farouk al-shara and that was something you know I could start to identify with and someone who was an immigrant conflicted about so many things in his life his identity his sexual identity and he had an overbite that was pretty sizable there were aspects of him that I would as how is this human being ever going to be on stage doing what he does and I think it was this kind of this tempest of something burning inside of him that no matter what the obstacle was it was gonna shine as radiantly and boldly and audacious audaciously as it did on camera Mercury was born in 1945 in Zanzibar by the name of Farouq Bursara to a Parsian family. The Parsians are a religious and ethnic community, immigrated from Iran and settled in India a 1000 years ago Farouq was passionate about music and played piano since childhood in India and Zanzibar, until his parents moved to England in the early 60's In England, he faced racism and later he changed his name to Freddie Mercury and repelled against his parents religion and had sexual relationships with men

Trust In Every Drop - Certified Origins