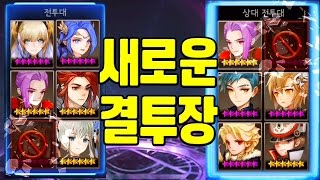 [0.42]
They've released a new live arena system so let's check out that new system right now The left arena is the arena that we've always had I haven't done the live arena yet so it's still the bronze badge If you look at the rankings, the number 1 is only at 1200 So let's check if that's because there are a lot of problems with this system I tried looking at the character placements Support hero, support skill, active battle stand, hidden hero There are a lot of options So I put all my fully equipped characters in the active battle placement with the rest on standby For now let's try going with an offensive deck Let's start Searching for players I don't think the player IGN shows at the beginning I think it's the hero selection stage so let's start picking the heroes Picking Mercure first I think the pets are selected randomly So let's try selecting a CC deck Do I choose another one? Oh I have to press "selection complete" Pressing "selection complete" I think they're picking two right now so let's see what they choose I think the hidden hero is hidden for both of us They have Vanessa and they even put in Teo I think it's an offensive deck Then I'll- Wait where's Teo? Teo isn't here I can't choose Teo what's going on? Let's just go with this then Oh they put in Orly and Ruri, wow Since we have to put in all 5, let's put in Karma And because they don't have any CC characters, let's try putting in Rin Should we go with this? Let's take Rin out and put Spike instead Oh what the? Aw I couldn't put in Karma, what happened? It's time to select the banned hero Let's choose Vanessa who has the cooldown increase And press "ban complete" So their Vanessa is banned now Oh Eileene appeared And it looks like we can't use the twins but that's okay We've entered the final setting selection stage It's pretty hectic Putting Eileene in the front Change it like this Putting Spike there For the pet, because they have Yeonhee let's go with Pike Let's use the front buff formation

[143.74]
It's an opponent with an English IGN Let's start right away with the cooldown increase They have pretty high levels What the? How did I lose the first skill? That's kind of weird Let's utilize Vanessa and put in the cooldown increase One died already Okay let's go with this Hitting them with Vanessa's first skill That's right Let's try using this now Teo's skill coming in He's level 50 so there's a lot of damage coming in Wait Ah I used the wrong one It looks like there's some lag Okay well let's just use this And I think Teo already used all his skills Looks like it'll finish after I use this one Since they already used a skill Why isn't my team using their skills? The screen froze so there is a bit of a lag Going in with Eileene's first skill It's only her left now Let's try using the support skills then

[216.6]
So if you don't select anything, they use random skills I want to try using this support skill Why is it so slow? It keeps freezing, what is this? The screen keeps freezing, the lag is pretty bad Wow what the? They survived That's right I don't really know what happened but we won the first match What is this? Due to a network error, the battle score will not been updated It became +0 Because they put in Kris, it looks like this is a defensive deck Looks like we're against a defensive deck Then let's put in Teo and go with a full offensive deck Putting in Karma to go with a buffed offensive team Oh Nata too, as expected it's a defensive deck Put this in, and put in Rin too to go with a buffed offensive deck Time to select a banned hero It'll be best to take out Kris Banning Kris And looks like Teo appeared Let's start our second match I should be the first attack so let's use the cooldown increase immediately Let's use the cooldown increase What the? Why didn't she use this?

[305.14]
This didn't go in, it feels like they're not using their skills Okay going in, hitting them with the cooldown increase And then we'll hit them with Teo's first skill After hitting them with 3 hits, going in with the second skill Using Teo's first skill Good, getting Rudy right away Let's hit them with another pierce It feels like they got hit with another cooldown increase I think they have two heroes with defense increase Okay get hit with this Using Vanessa's first skill Okay looks like Spike recovered his HP For the next skill, let's try using this one Hitting them with Karma's first skill After this, it'll be good to get rid of Teo Reserving the skill to turn reduce Teo Getting hit with earthquake Oh two people are frozen, but our Teo is still strong He needs to use his skill Because this is live the opponent's network speed is important too so there is some lag He's alone so let's just use the cooldown increase Oh Karma appeared And freeze is coming in It's kind of dangerous Let's use the cooldown increase, oh she's frozen Then let's go with Teo's first skill again After getting hit with this, Karma's the only one that's left If it's like this, let's use this one What the? I think they used something I'm going to use it too I'll use "Time Manipulation" too After this Let's use this support skill I think the screen froze again Oh they called another one out again Going in with Rin's first skill Wow it really is hectic After Rin's first skill, some got blinded, good After Teo gets turn reduced, it'll be good to call in Dellons Let's call Dellons now Why isn't Dellons coming in? Let's just use this

[453.3]
Let's try calling in Jave too Okay getting all of them Wow there were a lot of problems but we won this match too There was a network error this time too Okay I got the first skill this time, good Selecting heroes now Because Eileene is used in both offensive and defensive decks Let's pick Eileene first to confuse the opponent a little Teo and who is this? Is that Karma? I can't really tell who that is Let's put in the twins for now Seeing that they put in Orly, let's put her in, and then Nevermind, in times like this let's use Nia (for cooldown increase) Okay time for selecting banned heroes I guess it's a defensive deck Let's ban Ryan What type of deck is this now? Because I got the first skill, it'll be best to use the cooldown increase That's right, hitting them with the cooldown increase I already got rid of some of their void shields Hitting them immediately with Vanessa's first skill Okay good Going in again right away Have Teo revive I don't think I have any 3 turn reduce skills Oh they used the cooldown increase I'm using it too I'm using it too I have "Time Manipulation" too I want to look at the other support skills too CC reflect and There's a 3 turn reduce Using the 3 turn reduce support skill What the? If I had used the 3 turn reduce skill, I could have gotten rid of Teo but we used this one instead Okay let's first get rid of Teo using the 3 turn reduce support skill Oh they used revive Let's use this skill to get rid of Teo, okay good Turn reduce right away

[566.52]
What is this "Recovery Shield"? I don't really know what it is but going in right away Good

[573.8]
Orly looks pretty tanky Getting hit with Orly's skill Oh it kind of hurts Getting her with counter Using pierce, ah I should have used this instead The cooldown increased skill came back again, so we can use this now Wow that shield is pretty good Good, got him Oh wait, Vanessa is in danger I have to use this Let's use the twin's first skill first I think everyone has revived once Decrease some of his HP I think I can just use pierce What? Wow I don't know what happened but we suddenly won Finally my score raised once The twins and Kris appeared I think they're making it so we can't tell if it's an offensive or defensive deck Then let's try putting in Spike and Teo Just put anything in Karma and I think that's Jave Looks like it's a total defensive deck Then it kind of feels like it's a CC defensive deck Let's put these two in then

[645.04]
I kind of feel like they'll choose Spike Wow even Dellons appeared For some reason, I feel the twins will be low level so I think it'll be okay to just leave them in I think it'll be better to take out Kris Taking out Kris Eileene appeared and we lost Teo It'll be best to start with cooldown increase Wow the twins are actually pretty high level Hitting them with cooldown increase right away Next Let's use the pierce skill too Good, getting Rudy right away That's right, good Using Vanessa's first skill right away Hitting them with Vanessa's first skill Even though the twin's level was high

[691.76]
What was their pet? I don't remember what their pet was We avoided the electrify Hitting them with Rin's second skill

[703.74]
If you survive, we have to pierce you again Ending it with Eileene's second skill

[722.86]
Okay, I've tried the live arena a couple times There were a lot of matches that weren't updated properly So it shows that I only entered once and won once Since this is a totally brand new system I think there can be a lot of various and interesting decks that can be made