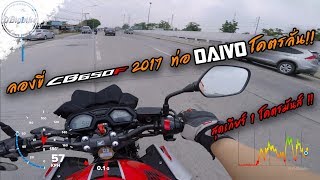 [0.32]
Hello there, it's dbigbike channel. Today I am going to take a ride on this. Bad ass muffler. Diavo's ,titanuim, slip-on Bad ass sound. It's been sometime. Since the last test ride video. Maybe you are bored my face. on review videos Today we are going to have fun. It's Honda CB650F current version I am suggest you to put on a headphone or high quality speaker. Or you miss its cool sound. With phone speaker, you would only hear treble range. Cool noise you would not hear. I am sure you are going to have fun with good audio device. It's CB650F. Absolutely latest version 100,000 views in two days for CBR650F. many many thanks

[74.98]
As everyone knows, CB and CBR are the same base. Same frame and engine. CB is for naked style. CBR is for sport touring style.

[87.76]
It's quite a lot of cars. I am going on the same route. Let's get on U-turn bridge. Cool noise in low rev. I am going to get full throttle on clear road.

[106.6]
The new Honda CB series is still give an old feeling in previously model. Now I am riding on a CB650F year 2017. current generation Back to ten years ago. CB400 Super four same feeling But more powerful same style

[137.72]
Really sweet sound. How could I taste it. Hear with ear not the tongue. Just a comparision sweet sound

[162.76]
Just have mentioned the CB400 Super four Why is it not available in Thailand market? Some people might miss the old day. I think. If it is available in Thailand, it might cost higher than CB650F. with the trend Super four have got V-TEC but CB650F have larger engine. I think this one still be more popular. Actually Super four is for Japan market. Japanese domestic market Because they have limitation by law. Bigbike driving license I have said this many times. Why JDM spec has the same appearance with our. We have 650cc. But they have only 400cc. So the Super four is sold only in Japan.

[231.44]
Since 1999, Honda put V-TEC technology into motorcycle. Because they aim for under 400cc market. limited by driving license So they put the technology instead. For better performance. Different from us. No worry about engine capacity. no limitation So we have got CB650F sold in Thailand. That's good for consumer. But these two could not be comparable, they give different experience. For V-TEC engine At 7000 RPM, V-TEC is actived. More air intake. more powerful like turbo boost Although it is non-air compression engine. Which different from CB650F, it is linear acceleration.

[338.8]
But for CB1300, it has no V-TEC at all. Because it is so powerful with 1300cc engine. With V-TEC, it might go wheelie every time it is actived. Just only Super four that come up with V-TEC. I think it is not necessary for any other models. powerful on it own It's absolutely clear way I am going to reach red line with first gear.

[396.8]
It can go more than 100km/h in first gear. While this one is no over than 100km/h. about 98km/h for maximum rev It is stock ECU. for speed indicator It's about 98-99km/h. While previous one is 101-102km/h. Because this one has been redesigned in gear ratio. I said this last four months ago. while I was reviewing the CB650F. But I forgot to say in CBR650F video. Which is major change for new version. Tighten gear ratio. So what is the different? Noticed that maximum speed in first gear. Just first gear is enough to feel the change. maximum speed for first gear is 99km/h. While previous one is 102km/h. Does not mean that previous is more powerful. It is different.

[485.74]
This one is better in acceleration. But maximum speed is decreased. Different from previous one. Higher maximum speed but slower to reach there. A little bit. millisecond

[503.74]
So this one is better in acceleration. Might because with special muffler.

[512.42]
different experience between new and old This one better in acceleration, but decreased maximum speed. That is for summarize. a little bit of different depends on what you like Now I am back to starting point. And I am heading to New "Dee Charoen-yont" I am going to take you to new place. one kilometer from old place located on next to Susco fuel station.

[551.64]
It is another good bike. So it has gained popular. For both beginner and experienced. Not so powerful, but enough to beat bigger one. Bigger one does not always win. But this one is for fun not to compare. It is not for circuit race. It is for normal usage. That is enough for today.

[599.14]
It is going to be louder at night. Neighbors would know you are coming. Good appearance

[632.56]
And over hundred motorcycle available here.

[642.1]
Now we are on the side of main road. I am exhausted after last time live stream. noisy environment longer live stream in old place Here is just half an hour before get tired. throat pain That is enough for today. Good content keep coming up next and next day. Thank you and goodbye.

New Animal Jam Artist Bundle - Is It Worth Your Money?