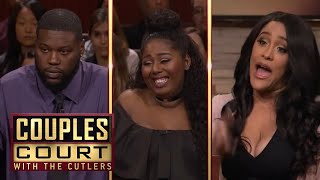 [387.353]
you know, that I can be submissive with. Mr. Johnson, do you have any other reasons not to trust her? Yes, sir, um... She say... She say that I don't step up, be a man and try to take her out. This and other... I planned a whole trip to Vegas, Fight Night weekend. The week before I flew out, Kiyanna ignored my text messages and calls the whole week. JUDGE KEITH: She just... She goes ghost. JOHNSON: She went ghost. When I flew out to Vegas, that day I called Kiyanna. She hit me back at 1:00 a.m. (AUDIENCE GROANING) At that point, I'm like, you know... I don't even wanna deal with this no more, so I spent the entire Vegas weekend trip without even seeing her. The week leading up to that, she ignores you. Yes. Let me tell you the truth. JUDGE DANA: All right, let's hear it. JUDGE KEITH: Ms. Monae, what's your side of the story? He called me, "Oh, my homeboys, they convinced me "to come watch this fight in Vegas. "We're gonna come out there. We're gonna come out there. "I'mma see you when I come out there. I'mma come..." So he never planned it for me, 'cause I was... I would have really been flattered if he really came out there to see me 'cause he never does anything. So that would have just made me like... (ALL LAUGHING) But let's be honest, him and his homeboys planned it. They got a hotel. He didn't even stay at my house. He got a hotel with his homeboys... Ms, Monae, regardless of whether he was coming out with his homeboys or not, if your significant other... If your boyfriend is coming out to the town you live in, you make time to see him. You didn't let me finish. He's lying to you all. Let me tell you the rest, okay? So, after he gets there, he talks crap and told our mutual friend that I was talking crap about her. JOHNSON: No. MONAE: Because he was mad that I didn't see him as fast as he had wanted to. JUDGE DANA: Okay. All right. Now, what kind of man does something like that? JUDGE KEITH: Ms. Monae... That's woman drama... JUDGE KEITH: Ms. Monae... And I was done after that. Don't want to see him. So... Now, hold on. Quiet. Quiet. Quiet. Quiet. Ms. Monae, you are saying, that all of this is because you're a celebrity. He doesn't understand the world you're living in... MONAE: He doesn't. ...and the things that you're doing, and the things that you've done are because of your celebrity status. And you're saying unequivocally, you're not cheating. No! JUDGE DANA: That is why... I just want some of that, and I can't even get that ass, I'm just... I don't know what to do. (ALL LAUGHING) If I can't even get... So, look... All right, so hold on, because... (ALL LAUGHING) Because you are a reality star, you're a Bad Girl on TV, we had to find out from a Bad Girl about a Bad Girl. Oh, no! We are pleased to have, Natalie Nunn who's gone on to become a successful entrepreneur... MONAE: Uh-uh. ...and a mother and a wife. And she was an original Bad Girl on the original Bad Girls Club. Ron, would you escort her in, please? RON: Yes, Your Honor. (AUDIENCE APPLAUDING)

[537.903]
Didn't even hug no one long. Hello. Ms. Nunn, we're so glad you're here... Yes. And to help us with this, and you were the original Bad Girl. I was. I was. Alright. Can you relate to this case? So, it's very overwhelming, you two. I hear you flying to Vegas, I hear you trying to move to Vegas, I hear the Fight Night, I hear it, "celebrity..." Girl... I was the original Bad Girl. Yeah. When you have a good man in front of you, really trying, you need to bring it down a few notches. I am a Bad Girl at heart. But I'm also an entrepreneur. I'm a mom. I am a wife. I'm five years married now. JUDGE DANA: Whoo! (AUDIENCE APPLAUDING) I'm trying... I'm trying to tell you, okay? And I was America's favorite Bad Girl. (JOHNSON LAUGHS) Okay? So... Ms. Monae is saying that this is just part of being a celebrity, part of being a reality star, part of being a Bad Girl. Mmm-hmm. That what she's doing, is just part of that persona. NUNN: Mmm-hmm. It's just playing to her fan base. What's the problem with that? Your fan base is my fan base. MONAE: No... Hold on, I'm gonna let you get away with some of this right now. 'Cause I'm a Bad Girl and we work, girl. But look, you need to separate your real life from your work. You're treating him like a fan. Like, how do you... How do you not... Why don't you wanna post him? Like, and I... On the flip side of that, in the beginning, I did not post my husband either. And I can relate to that, because there were times in the very beginning of our relationship, I was like, "Oh, no, you're not about to... Mmm-mmm... "You're not about to mess with what I got going on. "Because, I don't know if I really wanna be with you." You know, I'm not gonna show the world who you are, and now you're gonna be on all these blogs, you know, now I got another count on my list, like, another guy I'm dating... That's exactly how I feel. ... I didn't date, it didn't work out. And that's the issue. MONAE: That's exactly how I feel. That's the issue. MONAE: I don't know just like he doesn't know if this is real, I'm trying to figure out if this is real, 'cause if I'm not there, I cannot post you until I know for a fact. JUDGE KEITH: And that's why we're here. To find out. Mr. Johnson, you've brought a witness today, Is that correct? Yes. Ma'am would you, stand up to the podium? Would you state your name, please? My name is Jennifer Williams. Ms. Williams, what is your relationship to Mr. Johnson. I'm his big cousin, but we have a brother-sister relationship. He tells me everything. What do you know about this relationship? It seems that Kiyanna has a problem with communication. He goes long periods of time without talking to her. And she wants to... Any time she sees him again, she wants to pick right back up where they left off. It doesn't work like that. It seems very deceitful. She doesn't seem like somebody he should trust at all. And for him to get up and make a big move like that, nobody in my family knows her. We don't know her. We don't know anything about her. Oh! You don't know me? Except, except... So, how could... How could we know you? How could we know you? Hold on. Hold on, Ms. Monae. WILLIAMS: What we do know, what we see on social media, him claiming her, and she liked the picture, yeah, like you would like any other picture that a fan would post of you. JUDGE DANA: So, Ms. Williams, you're concerned that your little brother or your cousin... WILLIAMS: Mmm-hmm. ...is getting ready to uproot his life, with all his money, and it may be for nothing. Yeah. For nothing. Ms. Williams, thank you so much for your insight. JUDGE KEITH: Mr. Johnson, you have concerns, that whether you're getting a reality star, a Bad Girl, or someone that you could spend your life with. Well, a companion, correct. JUDGE KEITH: Ms. Monae, have you been cheating? No, no. Mmm-mmm. Are you dating anybody else? No. Are you sexually active with anybody else? That's cra... Like, no. Okay. JUDGE KEITH: That's what's at stake here. And that's why this court gets to the truth. Let's get to it. The court would like to call Kendall Shull, licensed private investigator, and former special agent to the FBI to the courtroom. Ron, would you please escort Mr. Shull in. Yes, Your Honor. (AUDIENCE APPLAUDING)

[775.674]
How are you, sir? Great, Your Honor. Thank you. Thank you. And we're glad you're here to help us get to the truth. Glad to be here. JUDGE DANA: All right. You did a polygraph examination of Ms. Monae. Is that correct? SHULL: I did. And you obviously have the results there. I do, Your Honor. Would you please state your credentials for the court, please? I was privileged to enjoy a career as a special agent with the FBI, Washington D.C. After completing a Master's Degree in polygraph, I became the chief of the entire FBI's polygraph program. After retirement, I moved to Knoxville, Tennessee, where I opened up Kendall Investigations which is a private investigative and polygraph company. Mr. Shull, just for the court record about how many polygraphs have you done over your career? Thousands. All right. You asked Ms. Monae, "During your 4th of July trip to Miami, "did you have intercourse with another man?" What was her response? She said, "No." What did the lie detector determine? SHULL: The lie detector determined she was being... Truthful. (AUDIENCE APPLAUDING)

[873.805]
She said "No." The lie detector determined that she was being... Deceptive. (AUDIENCE GASPING) What? Ms. Monae, this man is wanting to move across country to be with you. If you want that to happen, now is the time for you to come clean. I'm telling you, I've never had any sexual contact with anyone. I don't even know what that means. I'm like, "Sexual contact?" Does that mean I've never had sex with anyone? Never mad out with anyone, none of that stuff. I mean, I've had some strippers shake on me a little bit a few times. But I like, never had, like... No, I'm being dead serious. I'm really shocked. All right, Ms. Monae, we've gotten the results. The question is, Mr. Johnson, are you going forward with this relationship? Are you moving to Las Vegas? And what are you going to do? At this point, I have no clue after what I just heard, so... Well, Mr. Johnson and Ms. Monae, you all have got some issues, clearly, that you need to work out. If you all decide to move forward together... Yeah. ...please take advantage of the counseling resources that we have here. Okay. I will tell you, you all need to learn to communicate. You all just talk, talk, talk, talk, talk. Nobody hears anything. (AUDIENCE APPLAUDING) I tell her all the time, communication. No, no, no. Listen. If you all are gonna be together, you've got to figure that out. As we say in this court, don't cheat yourself out of a chance for a good relationship. Court is adjourned.

JOHNSON V MONAE: Celebrity expert Natalie Nunn weighs in on the case of a Kiyanna Monae from "bad girl's club" whose is being accused of cheating by her new boyfriend. Subscribe: https://bit.ly/2pX8WcM