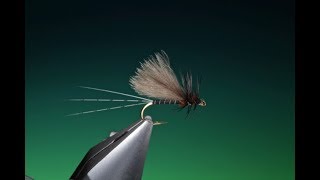 by: The feather bender

[0.319]
we'll start with a mr. da 30 size 12 dry fly hook this is another may fly as we're approaching that time of year it's a lepto free beer ute imitates both the Vespertine and the monkey nafta so black tying fret it's a couple of nice techniques in this just get rid of that but you want to keep this bit of black thread now dots right away we'll be using it so we'll just do a little foundation like that what we want here marries this silver dull fib it's separate three try and keep the ends the points as level as possible these want to be about so long so we'll just tie these in

[73.62]
we've got I pull these around the top tie these Dana we raise about this far or just before the thorax trim that off I can go what to build up a little bit of a taper on the body here this is a excellent part an early season it's a mayfly that's found in waters with the very low pH acidic waters and there's a lot of that here in Norway because of the acid rain from the UK and Eastern Europe so when we get to there what we do that is we take that piece of tying thread that we cut off and we go behind the tying thread and around the hook Bend like so I turn this this way so you can see it and then we go up what we want to do is but maybe I can separate these seek and see a little better not to separate the tails and bring the tying thread up so one thread goes between each of the tails and then what happens is when we tighten this it pulls the tails into a perfect tripod so I just hold those in position lock them off

[198.2]
got the shank before we remove these I fold them over and go back just a wee ways to lock it all off so then we can get rid of those two backs up and then you can see the tail is not more or less perfect and it'll stay divided into three like that you can use it on a tutu double tail as well just on two tails so back to that and what we need is a little length of pale yellow or I'll leave whatever you want to use tying thread I'll just tie this in it's going to be our rib just go that and then we go back up the body

[280.69]
I know and then I just want to build up a bit a lakh taper you're very thin bodied mayfly is that getting their knife

[314.71]
oh yeah we don't need any more than that so take my yellow rib now and I twist this you can't leave it flat if you wish but I feel it's best twisted and holding that we'll just rotate the vise

[372.759]
yep good back a little bit there and what I need is it just a tiny drop of super find Debbie Brown

[395.99]
all right then we need to CDC hackles we line the tips up on these and just pull them together like this

[437.36]
that's good the top of the shack that about a little bit longer than the length of the body the wing you always trim it down later so we're going from here just to lock it off remove that we take the black hackle for the legs which I've stripped one side of the a cloth I'm to go into the wing here like so up over there again

[495.08]
just trim that down go forward and work our way back towards the hackle the time game point there we are and a little bit more Brown the tapping again super fine just the same and need that turn behind the hackle and then we just make our way forward put a hackle plier on this this will be the legs

[554.279]
remove the help I just love that hackle off behind and in front you take tiny drop of varnish don't need any more than that on the tine thread and then we'll just wit finish there tighten that up

[616.91]
remove the tying thread move the hackle and then I'll just what I want to do now I have to remove it from the lice to this correctly it's trim off the hackles on the underside well just take your tack to do that okay press that back in that's it that's the claret or sea beer done no fine it's a great little button deadly when they're hatching

The Leptophlebia marginata and vespertina or sepia and claret dun are two very abundent mayflies that prefer more acidic waters like, hill lochs and forest lakes. This easy pattern can be made to imitate both these naturals. When the big flies are on the water you need a pattern that ticks all the boxes. Heres a mayfly dun that gives a great footprint and is easy to tie. Hook: Mustad R30 # 12-14 Thread: Black Tail: Three fibbets Wing: Two CDC hackles Body: Black tying thread with tying thread rib Thorax: Brown superfine dubbing Hackle: Black If you enjoy watching the videos please subscribe to my YouTube channel. Your help and support in keeping the channel going is greatly appreciated. Thanks…
Tying The Phantom Zonker With Barry Ord Clarke

How Can I Figure Out Her Ring Size? - Sneaky Tips And Sizing Guide