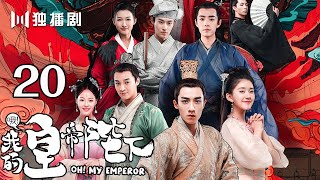 [126.4]
It's battle of two troops. If anyone gets hurt and I can't be there in time, they might get sequelae!

[288.48]
You listened for a long time. Minister Fang must have a good mood. The song is over, so is the conversation. Let's fight then. Fine.

[333.973]
Someone must have got killed. They definitely did, definitely.

[414.373]
Minister Zhang. Minister Mei. What're you calculating here? Listen, I've done the divination. His majesty will win! You're not Lord Chen, you can't predict. How could you know that? Don't believe me? How about we make a bet?

[454.946]
Minister Zhang only has a glib tongue. If you're that good, defeat me, weed me out. Minister Mei, take this. Su Xunxian is a scheming man, this must be his trap. Fang Jian suspects a lot. He will be panic. If I go directly, I might be walking into his trap.

[560.28]
Minister Mei, Be serious, okay? What're you talking about? I'm serious! Please hang in there, okay? Annoying. If you go on like this, I'll walk you out. Are you threatening me?

[825.746]
Report! Your majesty. Lord Chen's men use real weapons in the battle. Our side has been injured.

[994.84]
How could I do that? We agreed this won't be a real fight. Then we'll definitely hurt anyone. My lord. Seems these people are clouded in mind. Not like our people. Like psychos broke out from the prison. Maniacs? Wait, let me come with you. No need, you go protect his majesty. The rest, follow me!

[1031.64]
Report. Your majesty, my lord. Bad news. The maniacs disappeared before now came out again. They're in the competition area.

[1141.106]
This is the military token. Your majesty have passed my tests. This time is testing your judgment before the real enemies.

[1149.253]
Back then the late emperor was assassinated, you took the throne. And he gave me the military power. To act as regent to inspect. But now, I think you've passed all the tests. So I can unload the burden now.

[1188.546]
Lord Tang. It's a battle between women. We stay out of it. Master Bai. How could you say that? Changed your side at the last minute. But I can understand. Besides, does Dali count for a woman? Right. Does she count for a woman? Hit me.

Thank you for watching the show！Click the setting button - add subtitles to become a subber of " Oh! My Emperor "！ Let more people like you to enjoy it！Click here to get the help you need~ https://goo.gl/3RtIUo

The Israelites: Can You Endure? By Bishop Kani

[ep324] Infjs Hate Themselves When They Share Too Much

How To Choose The Right Sofa - Mandaue Foam Home Tv