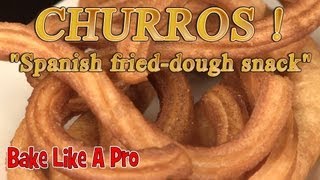 [10.74]
today I'm making a delicious fried snack food and it's called churros and what we need 1 cup of water 2 tablespoons of sugar 1/2 a teaspoon of salt 2 tablespoons of vegetable oil and 1 cup of flour and that's everything that we need for our dough so let's get started all right so I've got myself a little shaker thing here that I got at the dollar store I also have a quarter cup of just regular white sugar and two teaspoons of cinnamon and what we're going to do is we're just going to mix that in here so I'll get it in there like that I'm going to get the cinnamon in and we're going to shake this on to our fright snack food when they come out of the fryer now what's really good about this is that if you have stuff left over what's really nice is you can take toast in the morning if you put you know butter or margarine on your toast once this is all mixed up you can just give a little sprinkle and put that on your toast it's really really good I used to have this as a kid so you just make sure that's all mixed up properly and we're going to use this later so right now we're going to go over to the stove and we're going to make our batter alright so we've got our one cup of water so let's get that into our pot we're also going to get the sugar in there our salt and also the oil so we'll just get that in and what I'm going to do is I'm going to bring the water and all the other stuff inside here up to a boil so I'll be back alright so now we have everything boiling here so I'm just going to mix it around just to make sure that everything's incorporated well and I'll turn off my eat here okay so the Heat's off and now I'm going to take the 1 cup of flour and I'm going to dump it in there and then you got to start stirring this around

[216.549]
when you just go like this and grab a pair of scissors and cut just do it again so squeeze

[233.58]
have your scissors and cut my tip I'll have to admit my tip should be a little larger than this because I find it very hard to get the dough out so squeeze you can actually see me shaking and then cut so let's say I'm having a problem and you've got a bag like this and it's you know not coming out as well as a chit you can simply take the top off and then what you can do is just go in squeeze and cut you just won't have the little ridges but it's the same thing so I'll do it again

[303.91]
when they start getting brown on one side then what you want to do is just flip them over there we go so I squeeze and just use scissors and I haven't done anything to the scissors I haven't put any oil on them or anything so but it just cuts them very easily so if you see they're brown just give them a little slip all right you can see East three that we first did those are done now there are nice nicely golden brown so I'm just going to put them over here on my little drainer area and while these are still warm what you want to do is take the little mixture that we make and just give them a little sprinkle so this is cinnamon and sugar and that just ensures that it sticks because if they're cold that this mixture won't stick on there very well so there you go so I'm going to let these go the other ones go for a while and I'll be back

[377.99]
there we go few more all right these are ready to come out let's grab all these let them drain and I'll get a few more going

[415.68]
okay I'm just going to let these brown up and then I'm going to plate them and I'll show you the final product so here's the final product our troughs and as you can see here these are the ones that I piped without the little star shape right here and they're not nearly as nice and then you've got the ones with a star shape which looks really really nice so let's give it a little crunch listen oh man those are good those are really good I forgot how good those are anyway so that's it for this video so I'll see you next time

How to make churros ! I'll show you how easy it is to make Churros ! Churros are a fried snack that is piped out into a "snake" like shape, and is then covered with sugar or a sugar and cinnamon mixture. They are yummy and crunchy. They are popular in fairs and eateries. Many mistakenly believe this is a Mexican snack, but in fact it's Spanish. It's a Spanish deep fried doughnut. / deep fried donut. Simply put, churros are deep fried fritters. Thanks for watching ! Please subscribe and like if you can :-) My Facebook Page: http://www.facebook.com/BakeLikeAPro

To Infinity, And Beyond! (glitch!) | Gta V Funny Moments :d

Builderall Vs Clickfunnels An Honest Opinion