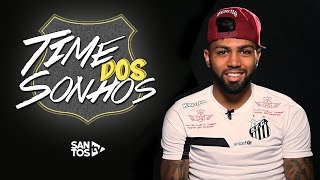 [4.868]
DREAM TEAM [GABRIEL] Hello, guys, I'm Gabriel, and my dream team is going to play in the 4-2-3-1 formation. COACH: GABRIEL [GABRIEL] Vanderlei is going to be my goalkeeper.

[16.977]
He knows how reassure our entire team, he's a friend of mine, he's a great player and a great person, so, he's going to be my goalkeeper. [GABRIEL] My first centre-back in going to be Edu Dracena.

[49.987]
Everyone respects and fears him, he's a great person, he's very skilled, he's left-footed, and it's hard to find a skilled left-footed centre-back. [GABRIEL] My right-back is going to be Victor Ferraz.

[66.216]
He has the ugliest haircut among Brazilian players, but he's a great player! He gives us confidence, and, as I usually say, he always gets out of trouble, he always solves the problems we face, so, he's going to be my right-back and the team's captain. [GABRIEL] Léo is going to be my left-back.

[86.835]
He's our idol, I played with him for a long time... after I was promoted. He gives us confidence as well, he's a great left-back, he knows how to attack, he also knows how to defend, those are the main qualities of a left-back. [GABRIEL] Alison is going to be my first defensive midfielder.

[108.391]
He's a great friend of mine, he really knows how to mark, he's extremely committed, I couldn't leave him out of my team. [GABRIEL] Renato is going to play alongside Alison.

[123.365]
He plays wearing a suit, he gives us confidence, he's very calm when he has possession, he determines the rhythm of the team, that's why I chose him. [GABRIEL] My midfielder is going to be Lucas Lima.

[141.38]
I don't have to say much about him, he knows how to control the ball, he's a friend of mine, he's one of the best midfielders playing in Brazil, and he has everything needed to be for a long time. [GABRIEL] My right-winger is going to be Robinho.

[158.731]
The Step Over King, our idol, he's extremely skilled, I don't even have to say it, he used to play in the National Team, he's very experienced, he helped me a lot, I couldn't leave him out of my team. [GABRIEL] My left-winger is going to be Neymar.

[178.734]
I played only one match with him, but he's in my team, he's a great player, one of the best players in the world. [GABRIEL] My centre-forward is going to be Ricardo Oliveira.

About Santos TV: Santos TV is the official Santos FC YouTube channel. Here you can be with your idols all the time. Watch behind the scenes, goals, live broadcasts, hability skills, learn how the club works, exclusive videos, remember historical moments with Pelé, Pepe and all of the awesome players that just Santos FC could have. Subscribe now and never miss a video again! www.youtube.com/santostvoficial

Behind The Scenes At The Warhouse: Will Power And Horse Power Collide!