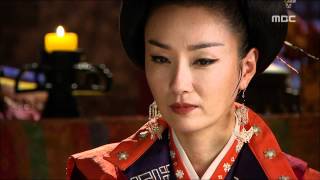 [1.951]
You’re so brave. And lucky. You were nearly killed. What were you thinking? I’m not a noble and she wasn’t accepting gifts. How else could I meet her? You’re so--! But risking your life? When you’re dead, you’re dead, see? I trusted to luck. Yeah, yeah, you’ll be lucky in your next life. Miss, may I? Come in.

[42.7]
Did you find out? Yes. His name is Gye Baek. He’s been detained during the investigation. Was he associated with the assassin? He claims the Prince was going to be late and he stood in for him. Yeah, the little wimp is no assassin. Whew, you’re both lucky to be alive. Someone’s here from the palace.

[94.825]
Eun Go. How is your injury? It wasn’t deep, thank goodness. The Queen expressed her gratitude and sends 100 bolts of silk. Goodnight. Wait. I didn’t do it for a reward. Please keep the silk. You’re declining the Queen’s gift? It’s only right. The box.

[124.7]
Please give her this from me. It’s incense. Ideal for soothing the mind and body. It may help in this time of stress.

[158.909]
In order to complete our investigation into the attempt on the Queen… we have to get to the truth of this boy’s unsubstantiated claims... against the Prince. The torture will be fair and just.

[200.742]
This bar scum claims it was just a coincidence… that he was standing in for you at the time. He claims he was acting on your orders. I never said that. I was passed out drunk, it’s true, but I never saw this guy before. Prince, how can you say that? I carried you up the stairs to your bed. Don’t you remember crying over your mother while I carried you? You..! How dare you? Who are you to try to incriminate me? How can you treat me this way? All I did was try to help you. Just tell them the truth.

[265.742]
If I had been involved in the attempt… if I had gotten past the guards posing as the Prince… why didn’t I bring a weapon? You could have found one when you got there. Then why did he save me?

[318.076]
He saved me when I lay injured. If he were the second assassin, he would have continued after the first failed.

[336.742]
Do you know him? I’ve seen him at the tavern we frequent. He’s insolent, nothing more. There’s something else.

[359.076]
The King commanded his Royal Guard to look into it. We’ve identified the assassin as an escaped prisoner named Mok Gyun.

[371.867]
I thought it was gone and forgotten. I never dreamed it would be Mok Gyun. We’ll have to find out who else is out there…

[392.659]
plotting revenge. If it is Mok Gyun it clears Uija. And the bar kid is telling the truth. Uija is only lying for fear of being punished. It appears so. What now? Didn’t the boy say Uija misses his mother?

[582.659]
What’s that for? Not enough? It’s more than the Prince offered to pay you. Not nearly enough. It doesn’t cover one ten-thousandth of what I feel.

[611.7]
Hey, hey… hey, you! Isn’t HE a piece of work. He could eat for months on this. He retarded, you think? He’s not an easy one to figure. Anyway, when will you see the Queen again? She’ll remember me and call for me soon. She must. And I have to go.

[785.867]
Were you really fighting with some thugs? Really. They usually fight with their hands. But they started losing and some guys rushed out with sticks. Which kids? Why? You going to avenge me? Don’t worry. I gave better than I got. I paralyzed two guys and crippled the rest.

[826.534]
Whoa, it doesn’t hurt. How did you do that? You weren’t that bad. That’s amazing. Don’t fight. And don’t start anything. I didn’t want to. What if someone attacks me? Run away. They’ll think I’m a coward. Be a coward then. You really are a wimp. But your son’s not.